PARAFFIN THERAPY FOR HANDS IN KRAKOW

Paraffin therapy for hands is one of the most popular SPA-procedures for the hands and nails care with the use of molten paraffin (in some cases with special additives of essential oils, salts, mud or other components).
Dry hands skin is a problem not only for women but also for the sterner sex. It’s no secret that a person’s age is easy to determine by hands skin condition. Paraffin therapy has a good rejuvenating effect.
In addition to rejuvenating effect, it has a pronounced relaxation effect, helping to relieve fatigue and stress after hard work; moisturizes and strengthens nails, prevents their fragility.
Specialists of OASIS Beauty&Spa offer fancied by our customers paraffin therapy in the list of performed SPA-procedures for skin care.
Paraffin therapy is a modern procedure that exerts a tonic effect on the skin, removes toxins from it and saturates with useful substances. Paraffin therapy in OASIS Beauty&Spa is, first of all, a safe and professionally performed procedure that will help your hands skin to be healthy and look always well-groomed. 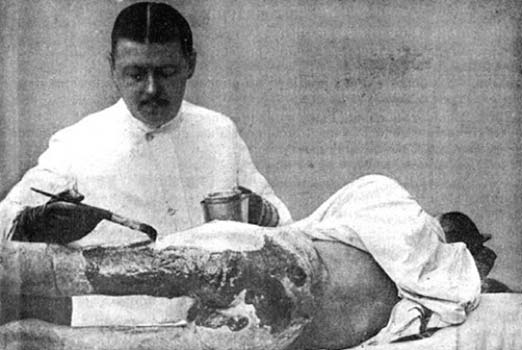 Despite the fact that paraffin therapy appeared in ancient times, this procedure is very popular in modern medicine and cosmetology.
A few historical facts about how and when paraffin began to be used not only in medicine but in cosmetology procedures for skin care of various parts of the body.
The origins of paraffin therapy go back to the time of the First World War when the French doctor Edmond Barthe de Sandfort developed a method for treating burn wounds, which he called keritherapy. Edmond Bart de Sanford created a patented mixture based on paraffin, which he called “ambrine” (from the word “amber”). The exact composition of it is unknown, but it is believed that it included solid paraffin and oil of amber resin. This mixture was melted and applied to damaged skin areas, enveloping them. After that, a film was formed that “sealed” skin surface, preventing infection and scarring. Taking into account that the ambrine composition was kept secret, other burn surgeons worked with their formulas, the most famous of which was called “Paraffin № 7”. It consisted of paraffin wax (67%), soft paraffin (25%), olive oil (5%), eucalyptus oil (2%) and resorcinol (1%).
In addition to the fact that paraffin was used to treat burn wounds, it was also useful for treating rheumatism, joint pain, and various skin infections. Even nowadays, physiotherapists use the heat accumulated by paraffin to reduce the symptoms of rheumatism and arthritis and make the body tissues more “flexible” before massaging or stretching them during various therapeutic manipulations (for example, post-traumatic rehabilitation).
Incredibly, but boiling paraffin, which was poured into virtually any part of the body, did not cause burns. Paraffin therapy became more and more popular. Its various methods were published in all kinds of magazines. With each day doctors mastered the technique of using paraffin therapy. Paraffin was applied to the whole body or to separate areas, even bathing in the melted paraffin was practiced. When he cooled down, the patient looked like a statue. After that, the patient was carefully covered with a blanket and left in a bath for such a period of time that the doctor considered necessary in this case. Despite the fact that the paraffin baths were a rather expensive procedure compared to conventional hot water baths, they quickly entered the practice of physiotherapists, due to their effectiveness.

As soon as paraffin baths were recognized by physiotherapists to be more effective than others, cosmetologists and aestheticians “grabbed” the idea of their use. Paraffin therapy gave a noticeable side effect – skin softening. Therefore, the procedure became even more attractive for aestheticians. Paraffin baths reduced puffiness due to increased sweating and simultaneously improved blood circulation. Cosmeticians of the 1930s caught at this effect. 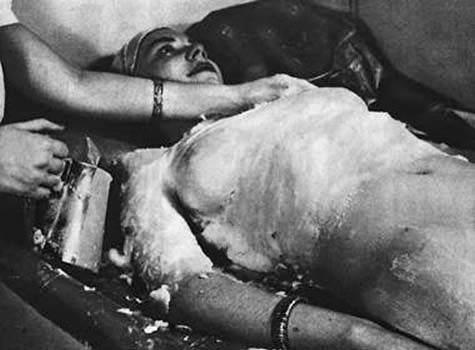 The use of heat to stimulate sweating is ” lifehack”, which has long been used to reduce weight, mainly due to dehydration. Although the effectiveness of such procedures is very doubtful – the excessive dehydration of tissues is harmful and the effect of weight loss, unfortunately, did not last long. Despite all this, paraffin therapy has long been used as a method to combat excess weight.

Many beauty salons since the 1930s and up to the 1950s “wrapped” their customers in molten paraffin – it was part of the program to reduce weight. For example, customers of Elizabeth Arden salon sometimes lost a few pounds. However, they were first treated with rollers to eliminate “unwanted deposits”, and then covered with paraffin in special “Ardena Wax Bath”. At the final stage, they intensively massaged the skin to remove fat deposits. When using paraffin therapy to reduce weight or soften the skin, it became clear that the results of such treatment were rather limited and short-lived. Despite the experience of predecessors, paraffin wraps “Parafango” are used in modern cosmetology. In combination with a complex of procedures for correcting a figure, the method of “Parafanga” is quite effective. Most likely thanks to modern technology, it was possible to turn ordinary paraffin baths into a “magic” composition, including algae, extracts of various plants, essential oils, etc. The “Parafango” procedure is still not a cheap pleasure, but connoisseurs of natural classical cosmetology are happy to visit the salons, where they can take this procedure.
Most of the salons that offer SPA services to their visitors use paraffin therapy primarily as a SPA-procedure for skin care with the purpose of its structural improvement, but do not use this technology in the fight against excess weight.

Why do cosmeticians prefer paraffin therapy to the present day? The main reason is that paraffin is a wonderful conductor of heat. In this case, if you immerse one hand in a bath of hot water, and another in a bath with paraffin, then the risk of scorching the first hand will be much higher. In addition to the fact that paraffin does not burn the skin, the wax layer, which is one of the components of paraffin therapy, acts like a blanket, evenly distributing heat on the skin surface. Moreover, the use of paraffin instead of water also helps prevent skin wrinkling, which is inevitable after immersion in water for a long period. After paraffin therapy, the skin condition is much better. It is prepared for subsequent cosmetic manipulations – masks, massage. Paraffin can be used on any part of the body that seems “problematic” to you, in particular, to relieve swelling at the ankles. Paraffin applications remarkably soften the coarsened skin. Due to the blood influx, its color is equalized. Since the induced heat can not escape from the thick film, under its influence the upper epidermis layers – in particular, the stratum corneum – are markedly “compacted”. The skin surface looks more homogeneous. For a long time, cosmetologists used paraffin masks for the face skin care, with the help of which they solved the problems of dry and withering skin easily. Currently, adherents of classical methods of cosmetology continue to use paraffin masks and delight their clients with the results.

Features and properties of paraffin therapy

What is the reason for the magic effect of paraffin therapy? Why, after the procedure, does even very dry skin become so soft, velvety and tender as the baby’s one? First of all, it happens because warm paraffin improves blood circulation and lymph drainage, and also activates regeneration – “renewal” of cells. As a result, the turgor improves – the skin elasticity, fine wrinkles are smoothed out. Among other things, the “greenhouse effect” of warm paraffin can be compared with the effect of a sauna: the skin warms up, toxins are released. The anti-stress effect of paraffin baths should not go unnoted. It is difficult to find a person who does not enjoy the immersion of hands in a warm bath with fragrant paraffin. Various essential oils are often added to the cosmetic paraffin. You probably heard about aromatherapy and its medicinal properties. Thus, paraffin therapy is not only a way to rejuvenate and restore skin, but also a great way to get rid of everyday stresses, relax and relieve tension.

Paraffin therapy for the hands can be carried out both as an independent procedure, and in combination with a manicure.
Usually, the procedure is as follows:

Keep in mind that in cold weather it is necessary to stay warm for at least 30 minutes in order not to expose to the wind and supercool the warm and moist skin after the procedure.
The effect of paraffin therapy is noticeable after the first procedure. But to consolidate the result you need several sessions, the number of which is calculated individually, taking into account the skin condition.
OASIS Beauty&Spa in Krakow is the place where our specialists will take care of your skin condition; make it well-groomed, smooth and elastic within a short time.

The price for paraffin therapy in Krakow

OASIS Beauty&Spa offers its customers a modern SPA-procedure for skin care. The quality and price of paraffin therapy in Salon Oasis in Krakow will satisfy the most demanding visitors.
If you want our masters to take care of your hands skin condition, make an appointment clicking the link or contact us at the following phone numbers:
Tel. +48 (518) 739-012;
Tel. +48 (12) 421-30-14.
Krakow, Kazimiez district, OASIS Beauty&Spa

Can be also interesting for you:
Paraffin therapy for feet.
Classic manicure